David-Michael Harding is a life-long writer whose last novel, How Angels Die, received critical acclaim.  A former semi-professional football player, his writing is hard hitting and passionate.  He holds a master’s degree in education and is an adjunct professor of writing. His respect and admiration of Native American culture inspired this novel. Most of his days are spent writing from the cockpit of his sailboat, Pegasus, somewhere off the Nature Coast of Florida in the Gulf of Mexico.

“Cherokee Talisman brings to life characters from out history and through a flare for fiction and historical research, Harding tells their story. Cherokees that might be painted by racist misconceptions as blood thirsty savages are humanized by Harding, making them heroes of a very real time. History is written by the victorious, but when almost forgotten historical characters are brought to life they are preserved for the ages, and in this preservation David-Michael Harding has succeeded.” – Cherokee Nation Principal Chief Bill John Baker

They were blood-thirsty savages – superstitious, dirty animals.
They were thieves and killers who burned houses to the ground and kidnapped women and children.
They were protectors of a Nation – guerrilla fighters serving their country.
They were husbands and fathers who built homes in lush valleys for their families.
They were – the same men.
In 1775 perspective came with the color of your skin.
An orphan boy, Totsuhwa, is taken under the wing of legendary Cherokee war chief Tsi’yugunsini, the Dragon. But even under a dragon’s wing isn’t safe when a covetous nation forms around them.
Amid the battles, Totsuhwa fights the reoccurring pain of loss until he meets Galegi, who becomes his wife. Trying to raise their son in a peace the new world won’t allow, they teach him the strictest Cherokee traditions while white assimilation, encroachment, and treachery grows. General Andrew Jackson wages war against tribes across the southeast and the toll is high. With his people gradually losing everything, Totsuhwa must find a way to save his family — and the Cherokee Nation — before all is lost.
Cherokee Talisman recreates the neglected history that existed when one nation was born and another almost died.
Two sisters take different roads in their work for the French Resistance during World War II. Claire is 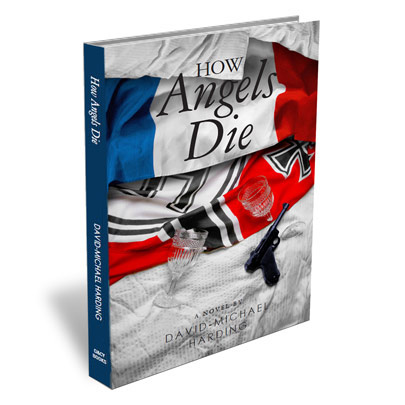 an active guerrilla fighter while Monique seduces German officers to learn military secrets from bedroom pillows. Love enters in for both as battles rage in their family over the morality of killing vs. sex while, unknown to them all, D-Day rapidly approaches.
How Angels Die is a highly dramatic novel with very strong female protagonists.  The story is rife with action, conflict, and intrigue.  Through it all, the characters struggle with devotion to family, country, cause, and oneself.  The reader is effortlessly drawn along the storyline and feels the impact of the events surrounding the sisters.  Compassion for the characters, German as well as French, runs deep and captures the imagination as coastal war-torn France comes alive on the pages.
Brimming with high drama that is punctuated by family humor, How Angels Die lifts the veil on a lesser-known side of the French Resistance. Through the prism of two intrepid women, the novel illuminates how these women employ their formidable assets and fierce love of country to face down a vicious enemy. With page-turning action, unstoppable passion, and historical accuracy, this heart-racing novel is a must-read for sisters, history buffs, and action enthusiasts alike.
More than a war story, How Angels Die compels its readers to face the decision-making processes that bring us to where we are and who we are.  It also asks questions of the mind that expose prejudices and the eventual regret that follows.
“In How Angels Die Harding delivers an edge of the seat read as he skillfully summarizes the events and pain of years of conflict during the Nazi occupation of France into ninety-six gut wrenching, mesmerizing hours.” David Roth, Tampa Writing Examiner